The Mystique of Visiting Sacred Sites.

Do your want to be uplifted? The mystique of Sacred Sites is very attractive to us. Many of them are in Bali. We go there because we have a need for peace, meditation, inspiration, healing and increased creativity. The sites puts a magic on us. Their energy fields are very, very special and sometimes something phenomenal occurs around them. Going to them is always beneficial—expanding your consciousness and enriching your life.

In Bali, we go to Goa Gajah, or the Elephant Cave, which dates back to the 11th century as a spiritual place for meditation. The cave was discovered by Dutch archeologists in 1923. But the pool was not excavated until as recent as 1954. First you come upon the pool which features statues depicting Hindu angels, “Water Goddesses,” holding holy orbs that act as water spouts. This is very stunning.

Sondra with the Water Goddesses

Caves are inside Mother Earth. They are naturally sacred sites. Especially caves in which, for centuries, people have been using for meditation and communion with the Higher Forces. We come out of a womb in this human life, and caves recreate that womblike mystery for us.  We feel rejuvenated, spoken to, and nurtured in these kinds of caves. But these caves are for people who are serious about the sacred nature of them. Therefore, they are often guarded, preventing the uninitiated from entering. They even put the initiated in a form of sharp attention.

The Elephant Cave’s entrance shows a menacing giant face with wide open mouth as the door. It is considered to be a manifestation of Ganesh, the “Elephant God,” the remover of obstacles.  Inside the cave are several indentations, large niches carved into the stone walls, where meditating priests once sat. Also within is a stone figure depicting Lord Ganesh. On one end tucked into a stone niche are Tri-Lingams, which are symbols of Shiva and the Divine Mother. 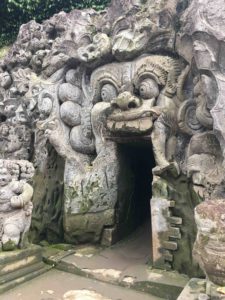 On goes through this entrance that is very formidable, and enters into almost complete darkness. It is like going through a giant yoni, itself. The keepers of the Elephant Cave have dimly lit the Tri-Lingam, which represents Lords Brahma, Vishnu, and Shiva. These are aspects of Divinity that embody Creation, Sustenance, and Destruction—respectively. 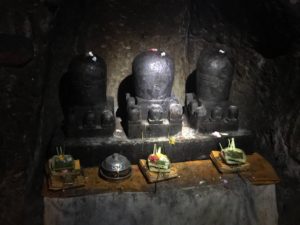 On the BALI QUEST we go to the Immortality Spring of Tirta Empul.

Another one of my favorites Sacred Sites is Tirta Empul in Bali. It is an important temple complex and holy mountain Spring near Tampaksiring. This water temple has a bathing structure which gives out free water—which Balinese people consider amrit, or “divine nectar.”

It was founded in 962 AD and is dedicated to Vishnu.  There are 13 elaborately sculpted sprouts that line the edge of the pool. Before entering one must first stop at an altar-like shrine and make an offering to the aspect of God which sustains all things—Vishnu. After that you can enter the pool, and with hands pressed together, bow under gushing water. You must dress appropriately, and the Balinese wear their finest batiks. You go into the water with your clothes on, and make sure that you are praying at each font for all the highest things in your life, and for all of the world. This is one of the most Sacred Sites on the planet, in my opinion. The energy is so high. 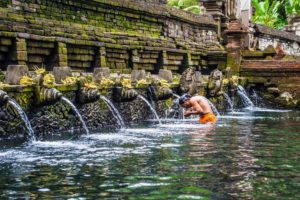 My friend and Immortalist, Robert Coon, writes about the Sacred Sites scattered all over the planet. Bali, according to him, is one of the most important spots on the planet because all the ley lines converge in Bali, where they are literally cleansed. Not only the many Sacred Sites here are responsible for this cleansing, but also the fervent prayers of the Balinese people make a huge difference in our world. If they were not doing such continual honoring of the Sacred, we would be in worse trouble than we are.

The water at Tirta Empul is believed to have magical powers and Balinese come to purify themselves. After we do our water cleansing and prayers, we go to the courtyard for ceremonies, and the Balinese priests there bless each person. We recite our 108 Names of the Divine Mother in unison, and it is quite a day! 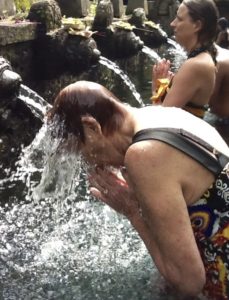 Sondra in the Tirta Empul Springs

I myself would not miss this.

Tirta Empul helps us attain this. It is the pure Divine Mother in Action! The Balinese have known this for centuries, and they honor the elements as few other people on this earth do. Tirta Empul is considered, along with five or six other Sacred Sites on Bali, to enhance, if not insure, anyone’s quest for Physical Immortality. We have just written a book on this subject that will be out soon.

I would not miss Tirta Empul. In fact, I feel I need to go there every year to be cleansed of all the crud we pick up in normal, everyday life. This kind of spiritual cleansing is just not available anywhere else, other than Herakhan in India, Babaji’s Home. There are many Sacred Sites on the planet, but Bali is the one to get you in touch with your immortality.

I hope you will join us on the BALI QUEST  this year. Go here to look it over: bit.ly/BaliQuest

We would love to have you along.